one afternoon in tijuana

Posted on February 26, 2015 by marycigarettes 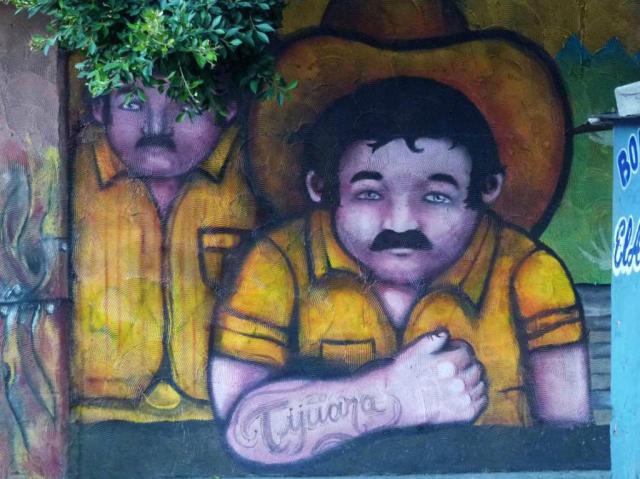 in 1990, i was just at the end of a summer long stay at the riot house hotel on sunset strip. my favourite place to hang at the time was a leather bar on santa monica boulevard called the spike.. i’d got to know vincent the owner real well…a fierce new yorker who’d came out to los angeles as a young man with only his street smarts and a roll of dollars in his pocket. he’d been a good friend to freddie mercury … freddie wanted him to sell up his bar and travel the world with him while he sang, but vincent isn’t a man who could be hijacked so easily..still.. it only made freddie and his close knit circle like him even more. when my daily recording sessions ended, i’d make a beeline for this bar to hang with him and all his bar tenders after closing time.. they’d talk and do shots of tequila while counting out jars of tips from an evenings work, which in reality paid rent more than any wage.

in those days it was legal to ride motorbikes round california without a helmet on, and one night, when he’d locked up, vincent decided to take me a run out on his harley at four in the morning on the wide empty hollywood freeway. my hair had grown all the way down my back, and it was a good feeling as we revved along with the warm california night blowing hard in my curly locks… when i returned for recording sessions the next day, enthusiastically recounting the thrill of this scenario, the producer and musicians went quiet…they were a talented and worldly bunch of men who worried for my safety, but because no harm came to me, i’m forever grateful for the experience. wild to think it was actually legal to ride around california with no crash helmet on though.

the barmen in the spike were rollicking company. in the summer they all worked their night shifts with shirts off in tight denim or leather jeans, and cause of that, many were serious gym-rats. a few of them took muscle steroids which isn’t a great idea, cause one of the side effects can a be temper if the dosage is high…there was one big blonde waspy chap called baron who got pulled to the side of the road on his way from work by a cop for bad driving. he got stroppy with the officer,and earned the nik-name ‘zsa zsa’, after zsa zsa gabor, who’d recently been arrested for slapping a policeman across the face in a queeny fit of rage…..there was the quiet older barman in a leather waistcoat called chopper. while barmen got hired and fired, chopper had been a constant in the place for years, but then one day he didn’t turn up for work anymore…it turned out A.I.D.S was on his horizon, so rather than fight the arduous battle that it surely was in those days, he quietly left the bar with a bottle of jack daniels, went back to his apartment and shot himself.

there’s more … it’s the end of the summer, and i’ve got a week or so before heading back to northern ireland. i don’t have much money,so two of the barmen from the spike called larry and joe invite me on a drive down to tijuana…right on the border of california / mexico… joe was a young butch looking new york italian, but slightly camp when he talked. he had a big heart..he made authentic lasagne for vincent who ran the leather bar…then there’s larry.. a very horny looking chap who knows it..shaved head.. does anything he can to not appear camp. he’s what they call in gay-speak, ‘straight acting’. larry’s the reason we’re heading to tijuana, cause they sell muscle steroids over the counter in chemists. he’s done this trip many times before.

when we get to tijuana, i’m struck by the charming colourful shambolic nature of the place, but there’s drama right at the border…helicopters overhead and cops on the ground, keeping an eye out for poor mexicans trying to smuggle their way over, for a new life in california…there was a street market, selling these gorgeous massive hand carved chess sets..the pieces sat about ten inches high off the board, and they were only a hundred dollars….to this day i deeply regret not buying one of them handsome chess sets, but i was worried about running out of money far away from home.

while larry went off and got his steroids, me and joe sat outside a ramshackle street bar drinking the most delicious strawberry margaritas. when larry returns he has all these tiny bottle type things in boxes…he’s wearing baggy trousers with deep pockets for a reason, and he asks me and joe if we’d carry some through the border control for him…joe obliges,but gets firm with larry when he says“gregory carries nothing,he’s still got a life”…this dear reader, is the main part of this anecdote….what sweet joe was referring to was how they,he and larry, were both h.i.v positive,and felt that they’d no future, but that i had…this is a powerful heartbreaking moment. i will never forget it. a sweet guy being mindful of my life,while at the same time feeling the game was up for himself…so many of their friends were dying you see.. it knocked me off my feet.. i never did find out what happened to larry, but when i got back to northern ireland i’d send postcards to joe, and within the next eighteen months he’d died…he wasn’t even thirty. y’know he trimmed my long hair of the dry dead ends once on the bedroom balcony of the riot house hotel and uncovered my first pure grey hair….i’m now completely grey..funny the little things you remember so well. i smile when i think of joe driving around hollywood with his disco cassette playing loud with the window down..it was that donna summer record produced by those english chaps, stock aitken and waterman… ‘this time i know it’s for real’

west hollywood and santa monica boulevard has all been cleaned up now … gone are all the hustlers.. there’s only one real leather bar left in the whole of los angeles..out on silverlake…a fun friendly place called the eagle.

vincent the fierce new yorker who owned the spike, moved away from hollywood, and is now happy living in new mexico where he makes jewelry in stones and metals. i met the cherokee indian who mentored him in the craft …his name was danny, a giant of a man with long black flaxen hair…he’d travel up to los angeles and sell his produce to buyers in high end stores around beverly hills…he died of dementia cause he slowly poisoned his blood by filing the metals in running water without wearing safety gloves…  before i left northern ireland, vincent would occasionally visit me there. one of my funniest memories of that is walking him to my grocery store out in the countryside…the only shop for six miles. here’s the thing…he was brought up to call any older lady ‘ma’am’ ….. so we go into this store ran by what you might call church goers….and in their innocence,they laid out the most disparate of products side by side…so on a shelf there were clothes pegs displayed right beside these big nylon ladies underpants…big ole pants ..right there by clothes pegs near the bars of soap …well.. vincent the big hairy swaggering yankee that he is, just lifted these big nylon bloomers up hollering..”oh i’m sorry ma’am,but this is just too funny”.    i was quaking in my boots dragging him out of there as fast as i could. what a character.

i kick myself for not taking more photographs in those days ….. even had one of those easy canon sure-shots, but was lazy in using it…i remember these folk so well though…               it feels good writing it down.

all my loving… mary of the wilderness.

This entry was posted in Uncategorized and tagged hollywood, tijuana, travel, west hollywood. Bookmark the permalink.

12 Responses to one afternoon in tijuana