michael clark and his cosmic dancers

Posted on December 4, 2013 by marycigarettes 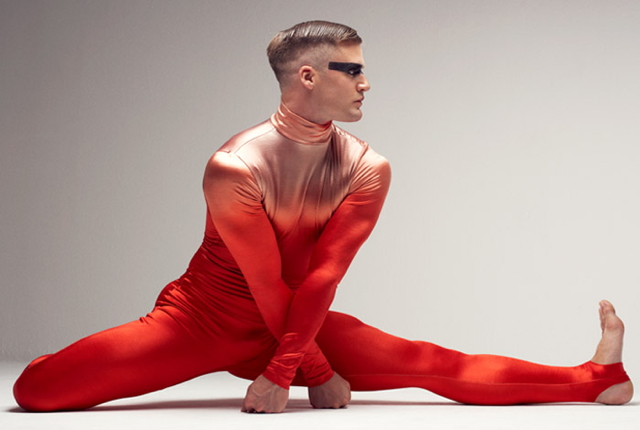 in the 1970’s a load of us of around fifteen/sixteen left school and home early with no cultural building blocks in place…except maybe for one….pop music.
pop music was like this crack in the grey cement where maybe a dandelion could escape through towards some sort of light…
i don’t mean to go all soft on you,but it’s true…
someone like me…raw as hell,and still to this day without truly wider tastes,at least broadened out to an extent thanks to rock n roll.
for some it was just a nostalgic element of their long gone youth,while for others it’s one thing constantly leading to another.
there’s much more detail and branches to the tree,but in short …
through david bowie i stumbled on andy warhol,where i stumbled on lou reed,where i got a yearning for cities like london and new york,
where i met a man called danny, who’d managed the ramones and iggy pop,who took me to my first ever ballet,right there in manhattan,
where i said to him…
“i’ll be out of my depth..i’ve never been to a ballet..i know nothing of dance”
where he said to me,
“don’t worry…all you need to know is it’s all about movement”…
so i sat there in the lincoln centre watching two dancers on stage..
it was very slow and minimal,where one dancer ever so slowly made his way from the edge of the stage to the other at the centre,and that was more or less it.
it was spellbinding…danny gently and graciously gave the crucial information..
it’s all about movement..simple..nothing high brow…just movement.
i am grateful to him and i’ll never forget it.
my next visit to the ballet was around 12 years later in london.
a young conceptual artist called james richards used a text based video of mine called ‘am i normal?’ for one of his own pieces of work,
and one night he kindly took me to the ballet at the barbican to see michael clark,who much to my shame, i’d never heard of,
but at least through music,and one thing leading to another,i finally caught up.
then a few years later michael clark came back around again to the barbican,and i went four nights in a row…
i suppose what i’m saying is pop music can be a priming agent for other art forms.
the great thing about michael is he often uses punk ..or glam or rock n roll or whatever you wish to call it.
on that occasion he used iggy…bowie..the velvet underground…so it was easier than ever to be drawn in.
last saturday night i ventured into london for the first time since my return from the desert to see michael clark’s company yet again.
there were three of us..a big butch handsome builder from newcastle with ginger hair along with the sweetest doll from new york who’s got a deep passion for our european rock n roll.
with michael’s roots partly in glamrock and punk,the bourgeois element was lower that it might be at ballet in general.
the audience felt great.
dear reader…
i’ve scoured the internet looking to find you good video evidence,and what i’ve learned is ballet isn’t easily bottled for convenient on-screen viewing.
the essential magic vanishes…you simply have to be there..
however i did find this most excellent documentary made by bbc scotland about michael….
so i don’t need to say much more.. http://vimeo.com/31072390
this is recommended viewing….and i was thinking i love how the scots ALWAYS say’bowey’,while the english say’bowie’…
but i regress..
the performance i saw michael’s company do on saturday night used among others,the music of scritti politti who i’ve always loved…
i will always feel indebted to pop culture..it gave me the compass i failed to grab hold of during those years at school…
instead i found it through sex..drugs,and rock n roll.
saturday night was pretty special …but then afterwards,where back in soho for hot chocolate, i walked with hurried gusto into a glass door,that left me mildly concussed!
kind of perfect really.
lots of winter love to you,and i do hope you enjoy that documentary i’ve linked.
….and for good measure,
here’s my own tribute to the glamrock of the nineteen seventies…
that’s me playing the ghost of glam in the long brown wig…
on the day of shooting, i realised how powerful wigs can be…they truly transform.
while we were doing the shoot,the boyfriends of myself and the skilled chap behind the camera popped by to check on us,and it unsettled my partner to witness me in that wig…he said it was like encountering a compete stranger..the power of a wig is so strong,it even changes the way you carry yourself…very strange.
blaze on brothers, sisters, and hermaphrodites ..
mary of the wilderness.

6 Responses to michael clark and his cosmic dancers